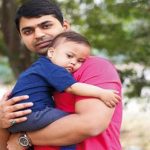 I fell in love when Binney first held my finger and wouldn’t let go.

Everyone appreciated former Miss Universe Sushmita Sen when she adopted a girl child and became a single parent. After so many years, the same instance has been repeated; but this time by a man! Aditya Tiwari, a 28-year-old Pune-based software engineer became the youngest single man in India to adopt a child.

This all began when Aditya visited an orphanage of the Missionaries of Charity in Indore. There he first spotted Binney, now one year and nine months old, who was abandoned by his parents from Bhopal because he suffers from Down’s syndrome and has a hole in his heart.

I had gone to gift a few things to the children there on my father’s birthday in September 2014. There were a lot of kids there, but Binney caught my eye because he was lying on a cot, away from all the revelry. When I went to play with him, he stuck to me and I felt an instant affection. At that time, though, I hadn’t given a thought to adopt him, says Aditya Tiwari.

Aditya revisited the orphanage a month later. He found that while many other children had been adopted, no family was willing to take Binney. That was the moment when he decided that Binney would be his son.

But, there were several roadblocks for Aditya. Initially his parents objected. Then the orphanage authorities told him they could not let an unmarried man to adopt. The Missionaries of Charity are against single-parent adoptions. For many months Aditya kept visiting the orphanage and tried to convince sisters. He then contacted the women and child welfare (WCD) department and sent about 100 mails to Maneka Gandhi.

I complained to Prime Minister’s Office too. Gandhi spoke to me over the phone and said she was asking the Central Adoption Resource Authority (CARA) to work with the Bhopal Child Welfare Committee and resolve this matter. After my complaint, Binney was ordered to be moved to Matruchaya, another adoption agency in Bhopal, said Tiwari.

The authorities at Matruchaya remained reluctant, even after Maneka Gandhi’s visit to the orphanage to see Binney and her instructions to hand over Binney to Aditya immediately. But determined Aditya didn’t give up.

Once again, I petitioned the PMO and WCD. The central government sent a notice to the state government and finally due to mounting pressure, in December 2015, I got a mail asking me to take Binney home between January 1 to 8.

Binney, who is now with his father Aditya, has got a new name, Avnish Tiwari. Aditya took him to a pediatrician who said that he might not require an immediate surgery for the hole in his heart.

As far as Down’s syndrome goes, I have read about it and consulted doctors. I know my son’s mental growth will be slow but unlike his biological parents, I won’t give up. The doctor says if Binney is around children, it will be better for him. Thankfully, there is a daycare in the office building, where I plan to keep him. I also get adoption leave for 150 days. But so far, there hasn’t been a need. He has fit right into my schedule, Aditya Tiwari.