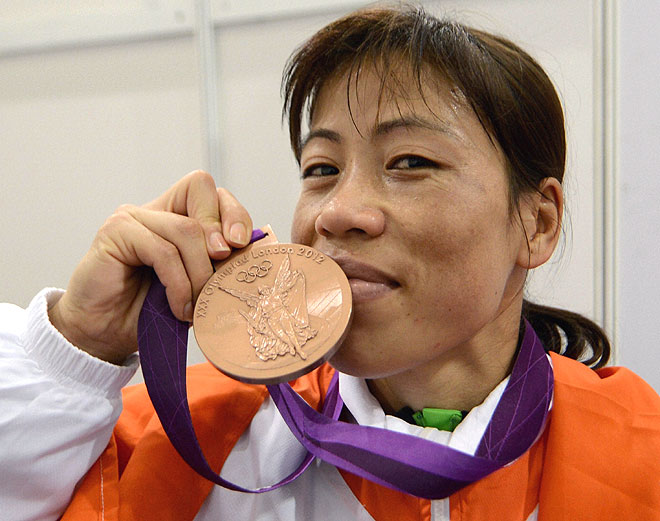 Elite Sports : The rise of Mothers

Family planning is always a challenge for sportswomen. Millions of thought come across your mind like what will happen to your career after giving birth. Expecting a child is not a disability which will stop you to achieve your goals instead your child can be your biggest source of inspiration. Krishna Poonia, the discus thrower had set a target of 65m so that her son can wear T-shirt which will have ‘Poonia Crosses 65 metres’ written over it. Below is the compilation of sportswoman who acts as an inspiration to every sports woman who thinks family planning can add full stop to their career.

Magnificent Mary is a boxer from Manipur, India. She is the only Indian boxer who qualified for the 2012 Summer Olympics. The mother of three had made successful comeback after giving birth to twins, Khupneivar and Rechungvar. Mary Kom is the only woman boxer to have won a medal in each one of the six world championships. She is an inspiration to every sports woman who thinks family planning can add full stop to their career.

A discus thrower and a mother of Lakshya Raj Poonia made successful comeback to the field. An Arjuna Award receiver Krishna Poonia has career best of 64.76m at Hawaii. The Government of India awarded her the civilian honour of Padma Shri in 2011.

Ujjwal’s mother, P.T. Usha is an Indian track and field. She holds the title of “queen of Indian track and field”. People often called her as “Payyoli Express”. Although she enjoyed domesticity and motherhood, she was drawn back to athletics, and astonished the country by winning bronze medals in the 200 m and 400 m at the Asian Track Federation meet at Fukkowakka in Japan, 1998.

Christie Rampone sometimes referred as “he First Lady of Soccer Moms”. After having her first child, Rylie in 2005, she returned to the field for China’s Four Nations Tournament. In 2008 she brought glory to the USA winning gold in Beijing.

Dara Torres is an American former swimmer. Just three weeks after her daughter’s birth, Torres was back in the pool at the Masters Nationals where she broke a world record. What’s more impressive is that just 14 months later, in August 2007, Torres won a national title and broke her own American record in the 50 freestyle.

Kim, a tennis player, after giving a birth to a baby girl named Jada announced that she was returning to tennis. Clijster was easily beating ranked opponents. She beat Serena Williams in the semifinals in straight sets and faced Caroline Wozniacki in the finals of U.S. open.

Shiny Abraham Wilson, the mother of three, represented India more than 74 times in international championship. One of her greatest achievements was that she was running even faster after the birth of her child and she set a new record of 1:59.85 in the 800m race at the 1995 South Asian Federation (SAF) Games in Chennai. Shiny was awarded the Arjuna Award in 1985, Birla Award in 1996 and Padma Shri in 1998. She is also the recipient of Chinese Journalists Award 1991 for being one of the Top Ten Athletes of Asia.