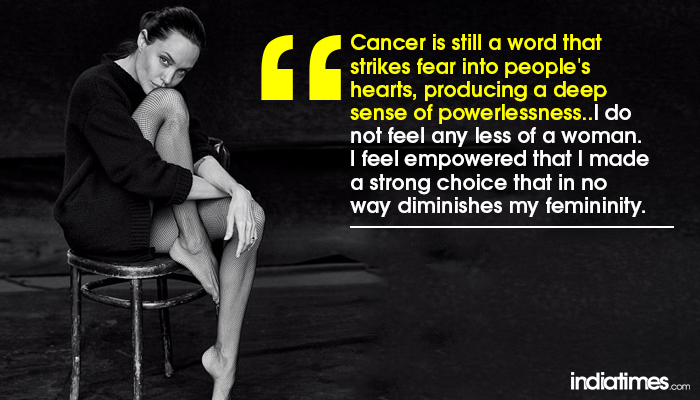 One word which is scarier than ‘death’? Cancer, for sure. The word is scary but the disease is more scarier. Everytime we eavesdrop a conversation that has the word ‘cancer’, it surely leaves us shuddering.

4th February is celebrated as world cancer day. As an ode to every cancer survivor, this day celebrates their spirit and hope.

When was the last time when you read someone’s story and you were all teary eyed? Well, stories of cancer survivors are so honest and inspiring that it’ll leave you wondering if you’re valuing your life enough or not. Let’s have a look at 9 celebrities who didn’t just battle cancer but they resumed and gave a second chance to their life. Have a look.

Little did Dil se actress Manisha Koirala know that one fine day, her life would turn upside down. After she was diagnosed with cancer, she flew down to the US for her treatment and after a tough fight, she emerged victoriously. She came back with a smile! Cancer can harm your body but your spirit? Not really.

When India’s most favorite batsman was diagnosed with cancer (Malignant tumour known as seminoma which was found between his lung and heart), fans all over the globe were shattered. Yuvraj underwent a treatment in the US and his updates about his treatment as Facebook posts were enough to comfort his fans. After putting his brave foot forward, Yuvi didn’t just come back as a winner, he entered the crease with a victorious roar.  He even wrote a book about his struggle with cancer – The Test of My Life.

After successfully battling myeloma (cancer), it was in October 2015 when Lisa Ray openly confessed that she still is living with cancer. She said, “I was diagnosed with blood cancer which is considered incurable and I am still living with this condition.”

She said all of this with a wide grin. It says a lot about her courage, isn’t it? More power to you, Lisa!

Not many know that director of films like Life in a metro and Barfi once battled cancer and that too when his survival rate was 50%! The doctors gave him 2 months to live but instead of being let down by doctor’s harsh predictions, he took writing and wrote scripts of his films that include  ‘Life in a Metro’ and ‘Gangster’. His courage deserves applause. Isn’t it?

In 2013, Hugh Jackman discovered Basal Cell Carcinoma on his nose, and since then he’s had several procedures for skin cancer. Jackman now gets checked every three months. Apart from getting proper treatment for himself, the way he used his fame to raise awareness about skin protection id definitely commendable.

He even shared his post-surgery pictures on Instagram, where he urged people to,  “PLEASE! PLEASE! WEAR SUNSCREEN!”

One of the most gorgeous actresses of yesteryears Mumtaz was diagnosed at the age of 54. Instead of giving up, she chose to fight. After some of the most dreadful sessions of surgery, chemo and radiation, she chose to give life another shot. She battled her weight gain, fatigue and other side-effects. Till today, her face has grace and charm which could give young actresses a tough run for money, all thanks to her exercise routine, swimming and a positive attitude!

In 2010, Mumtaz featured in the UniGlobe Entertainments documentary on cancer survival ‘1 a Minute’, with other international stars who had fought and survived cancer.

You would be truly living under a rock if you are clueless about Lance Armstrong and his battle against life-threatening cancer. It was in 1996 that Armstrong was diagnosed with aggressive form of testicular cancer metastasized into his lymph nodes, lungs and brain. After undergoing two surgeries, one to remove his cancerous testicle and another to remove two cancerous lesions on his brain, he also received four rounds of chemotherapy. But guess what? He didn’t give up and chose to live to the fullest!

How often do we take our dreams seriously?

In 2001, Mark Ruffalo had a vivid dream that he had a brain tumor. Was it a premonition? Well, yes. He was diagnosed with a brain tumor and he chose to not disclose it to anyone. Since his wife was pregnant, it was only after the birth of his son that he made a public announcement. He took it all sportingly and after a successful surgery, he is proud to say that he’s a cancer survivor. Last year, he even he went shirtless in order to campaign and spread awareness about Breast cancer. He used twitter and Instagram extensively!

With her ovaries and Fallopian tubes removed, the mother-of-six entered early menopause. She won’t be able to have any more children but that could never change her equation with Brad or her family. If we ever happen to give a title to Jolie, it surely would be ‘woman of courage’! Agree?

If you still don’t take patches on your skin seriously and still look for reasons to not go for a complete health checkup, do yourself a small favor and mark it on your phone calendar NOW! 🙂