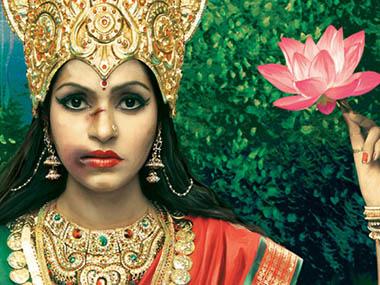 A year ago, my little 4-year old came back from school, eager to tell me the story of how Ganapati got his elephant head. As I listened to her reciting the well-loved and familiar tale with gusto, I was struck by one jarring detail.  “Parvati felt so sad when Shiva killed her little boy, she started crying,” she said, explaining how Shiva replaced his head to soothe his distraught wife.

This was definitely not my grandmother’s Ganesha story. My daughter’s very progressive pre-school had sanitised the myth to fit the portrait of a happy modern nuclear family. Don’t worry, good daddies comfort sad mommies, and make it all okay.

“No, baby, Parvati was so angry that she vowed to destroy the entire universe,” I corrected her, “The gods were so terrified that they ran to Shiva and begged him to bring the boy back to life.” The Parvati I grew up with was not a heart-broken waif, but powerful and feared goddess whose wrath had to be appeased in order to save all creation.

This transformation is not restricted to one school play. The tamer version of the Ganesha myth rears its conservative head on various Hinduism sites online — from where it presumably found its way to my daughter’s school. In 21st century India, we have become uncomfortable with that other Parvati, the embodiment of the divine principle of Adi Shakti, the goddess of a 1000 names who strikes terror in the hearts of gods, demons, and mortals, alike.

This year’s Ganesh Puja coincides with another such act of domestication. A new public awareness campaign is making waves for portraying Lakshmi, Saraswati and Durga as victims of domestic violence. The eyebrow-raising images of the “Save our Sisters” initiative are accompanied by text that reads: “Pray that we never see this day. Today, more than 68% of women in India are victims of domestic violence. Tomorrow, it seems like no woman shall be spared. Not even the ones we pray to.”

The message is intended to shame: no woman is safe in our culture, not even our beloved goddesses. The Lakshmi who we once beseeched on bended knee for good fortune now sits sad-eyed on a lotus sporting a bloodied nose. This Saraswati’s infinite wisdom and knowledge are no defense against a black-eye. The same Durga who once danced on Mahishasura’s corpse now stands bruised, battered and teary-eyed, begging for our protection. This Saraswati’s infinite wisdom and knowledge are no defense against a black-eye.

The campaign instead does grave disservice to both our deities and women.

A male colleague points out that the campaign feeds into “this oscillation between women as goddess/ women as sluts that we can’t get out of as opposed to women as humans/equal citizens.” It is an updated iteration of the conservative woman-as-goddess theme; highlighting the plight of the Sati/Savitris and Ghar ki Lakshmis who suffer at the hands of uncaring men.  It sends out the  message that  “good” women deserve our protection and compassion — while unwittingly suggesting that the “bad” ones may not.

Worse, the advertisements rob Indian women of our culture’s most enduring images of feminine authority by reducing our goddesses to victims,  stripping them of their awesome divinity.   Even in the most patriarchal reaches of our society, the powerful goddess offers cultural sanction for female desire, self-assertion, and power. As we are reminded over and again — in ritual and fiction — every woman  carries within the her the seed of divine transformation. Hindi films from Mother India to Kahaani have drawn on this theme of hidden feminine power. Be it the mother who shoots her son or an avenging wife who assassinates her husband’s killer, the meekest bharatiya naari can turn into a vengeful Durga when pushed too far. The same Durga who once danced on Mahishasura’s corpse now stands bruised, battered and teary-eyed, begging for our protection.

Transforming the triumphant, red-toothed Durga into an abused wife does not empower Indian women, but reinforces their helplessness. What hope do mere mortals have when even a goddess cannot resist abuse or protect herself?

On this Ganesh Chathurthi day, I far prefer to tell my daughter of the story of Parvati’s incandescent wrath, not the sorry tale of her pitiful tears. Where one makes my little girl feel mighty and strong, the other encourages her to rely on the mercy of men. So, please, let’s bid a hasty goodbye to these new-age, teary-eyed goddesses. They are a giant step backward for all womankind, both mortal and divine.